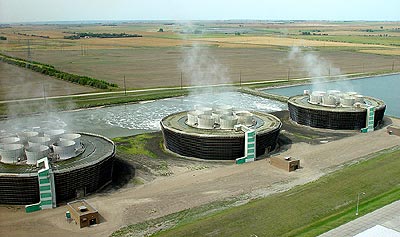 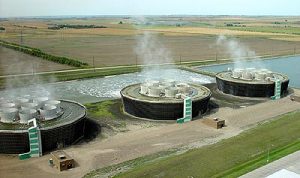 Great River Energy’s Coal Creek Station in Underwood, N.D., is fueled 100 percent by lignite coal. Because the pyrites and ash from the lignite are abrasive to the power plant’s pipe lines, Coal Creek had problems with leaking in its pulverizer reject lines. Plant personnel searched for a way to mitigate the effects of this leaking and extend the pipes’ life. They found that wear resistant basalt- and ceramic-lined piping extended the reject piping’s life and reduced maintenance requirements.

Coal Creek Station is North Dakota’s largest power plant, consisting of two units, each rated at about 550 MWs. Unit 1 at Coal Creek Station began commercial operation in 1979 and Unit 2 in 1980. Each unit burns approximately 11,000 tons of lignite per day from the Falkirk Mine, which is adjacent to the plant.

Lignite coal contains an abrasive portion of non-combustible material that is extremely damaging to piping. Coal Creek had major issues with abrasion in the pyrites rejects pipes, which required them to be rotated annually. Even with the annual rotation, the piping still leaked and began to cause problems within the plant’s pulverizer area. In addition, repairing the leaks and continually rotating the pipes increased the company’s maintenance and labor costs. “It was really getting to be a high maintenance area,” said Louis Simenson, a maintenance mechanic with Great River Energy.

Myron Schell, also a maintenance mechanic with Great River Energy, agreed, “We had leaks in those areas and, because of the way the previous pipe was designed and installed, we were down in the water a lot. It (the pyrites reject pipe) began to wear out faster so the decision was made to look for other solutions.”

The new lined pipe and fittings were installed in the pulverizer reject areas when each pulverizer was brought down for an overhaul. “We would go in and tear out the existing line and start putting in the ABRESIST® line,” Schell said.

The primary benefit from the basalt-lined piping and ceramic-lined elbows is the wear protection they offer and the resulting life extension. The power plant also realized labor savings, decreased pipe maintenance and less downtime. “In our system, everything is abrasive because we use jet pumps to pump everything out,” Schell explained. “We have water that contains abrasive material and we’re basically wet sanding everything at a high velocity.”

With the new lined pipes and elbows in the pulverizer reject line, Schell and Simenson intended to rotate sections of the pipe about every four years to help even out the wear and give the pipe a longer life. Before the lined pipes were installed, the previous pipes had to be rotated more often. “We were rotating the other pipes every year,” Simenson said. Rotating the pulverizer reject section of the line required about two to three days of plant labor. By extending the pipe rotation to every four years instead of annually, the extra days of labor can now be spent more productively.

The basalt-lined piping and ceramic-lined elbows have been in the Coal Creek Station pulverizer reject line for eight years without rotation. An inspection was performed earlier this year and the company was pleased with the outcome. “We found them (the pipes) to be fine, a little bit of wear, but after eight years you’re going to have some wear. We put the pipe back together and were totally satisfied,” Schell said.

“We were anticipating that we were going to have to rotate these lines,” Simenson said. However, plant personnel have decided that they can wait four more years before rotating the pipes, resulting in a total of 12 years of service before pipe rotation is needed.

The new lined piping and elbows have also reduced the abrasive wear in critical areas of the line, such as the elbows. The new elbows of the pulverizer reject line, lined with KALOCER® high alumina ceramics, have mitigated abrasion caused from the material changing direction. “The elbow is a higher abrasive area because it’s changing the flow’s direction and you have an impact point. We will probably have to replace them every five to six years,” Schell said.

Coal Creek Station needed a solution to its wear problems in the pulverizer reject areas, something that could help reduce maintenance costs and labor time. The lined pipes and elbows from Kalenborn Abresist Corp. have proved to be that solution.

They have helped Coal Creek Station reduce its down time, maintenance costs and labor while increasing the life of the plant’s pipes. The lined piping not only stopped the initial leakage problem, but it also offered better overall wear-life on the pipes and allowed the plant to go for longer periods of time without rotating its pipes. “Certain pieces of equipment, like the pulverizer, will come down every four years, so you want to make sure that the other products in the system will last four years, if not longer,” Schell said. “The same thing is true when you bring down a unit that’s been running three years; you want to be sure that the associated products will last for at least three years. So, if you can save some dollars on the material and work with vendors to accomplish all that, you can keep your operating costs down.”