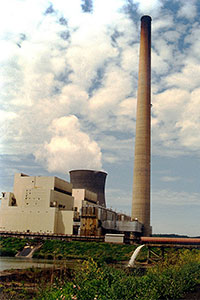 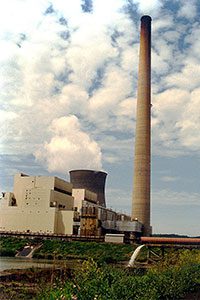 Built in 1973 with operation beginning in 1974, the plant has a generating capacity of 2.6 million kilowatts and consists of two-1.3 million kilowatt units. Energy created by the power plant is pumped into a grid which supplies power to a seven state area.

The coal fired plant burns about 20,000 tons of coal daily or 6 million tons of coal annually when both units are functioning. The bituminous coal burned by the plant has an ash content of 19%. With a consistency of coarse sand, the bottom ash is extremely abrasive.

In 1973, ABRESIST basalt lined pipe and elbows were installed during initial construction. The straight sections of pipe had a 7/8″ thick basalt lining. The elbows had a 11/8″ wall.

When AEP installed scrubbers at the plant recently, the bottom ash pipe had to be moved to make room for the new equipment. As workers removed the original basalt pipe they discovered that much of it had withstood 19 years of erosion associated with bottom ash and was reusable.

The straight sections placed in 1973 showed only 20% wear. The original elbows received more abrasion from the change in flow direction and showed more wear. The basalt lined pipe has handled all of the plant’s bottom ash since its construction and is still use.

Installed in 1973, ABRESIST wear resistant pipe lining from Unit 2 ties in with new routing from Unit 1 laid in 1992.

ABRESIST pipe with 10″ and 12″ ID rests on treated lumber supports. AEP laid 4000′ of 10″ and 2500′ of 12″ Abresist basalt lined pipe when it installed scrubbers recently at its Gavin Power Plant.