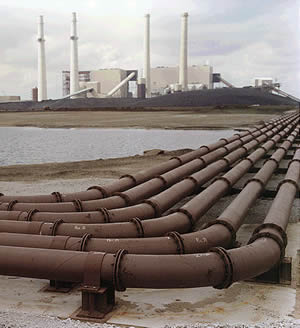 Nipsco has eliminated the cost of rotating and replacing ash removal pipelines by installing pipe with abrasion resistant linings at the four coal-fired units of the R. M. Schahfer Station in Wheatfield, IN. The four generators produce in excess of 1,800 megawatts of power. The station began operation in 1975 with the commissioning of the 500 megawatt Unit 14. Unit 15, also 500 megawatts, was commissioned in 1979. Both units have UCC ash removal systems. The original bottom ash pipe was hardened cast iron and after four years it was necessary to rotate the Unit 14 pipe to lengthen its life.

Because of the short 5-8 year life expectancy of the cast iron, the utility began looking at alternatives while Units 17 and 18 were still in the planning stages. Several lining materials were evaluated and the company chose ABRESIST® fused cast basalt. According to Nipsco piping supervisors, the choice was made after a thorough investigation based on the expectations for longevity, maintenance cost and cost of erection. Prior to the commissioning of Unit 17, Nipsco purchased 11,000 of ABRESIST pipe in May of ’81 and 17,000 more feet in January of ’82. This new pipe system would handle the ash from Units 14 and 15 as well as Unit 17 which would come on line in 1983 and Unit 18 which would come on line in 1985.

Six pipelines exit from a trench on the east side of the building and run over 3,000 to the ash ponds. A support and anchor design was used with expansion joints located in the long runs. A total of 28,000 of pipe was used to replace worn cast iron pipe on Units 14 and 15 and installed on the new Units 17 and 18. The on-site piping contractor noted that the installation of the new pipe went very smoothly. No leaks were found in the test run. After 12 years of steady use, a thorough inspection performed by outside piping maintenance personnel confirmed that the ABRESIST pipes are living up to Nipsco’s expectations. The special telescoping expansion joints have performed perfectly and none of the fittings have needed to be replaced to this date.

Since the original orders, more of the original cast iron and ceramic lined fiberglass pipes have been replaced with ABRESIST pipe. The utility anticipates that when the entire ash removal system has been retrofitted, the cost of rotating and replacing ash piping will be virtually eliminated.