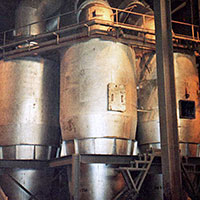 Three of the six cyclones at the Canada Cement Lafarge facility that have with-stood abrasive.

Quench tempered steel linings in six cyclones at a Canadian cement plant required patching at an annual cost of $60,000 to $80,000, nearly half of which was allocated to material costs. According to maintenance supervisor Joe Sato of Canada Cement Lafarge’s Exshaw, Alberta, facility, abrasive limestone and shale clinker up to ½-in. diameter were wearing holes through the pre-cleaning cyclone’s surface, and were causing leaks.

Because of disappointing results with quench tempered steel as the patching material, Canada Cement Lafarge ordered a lining material made of fused cast basalt, which is resistant to the abrasive effects of clinker and can withstand the cyclone’s 250°C (480°F) environment. The material has a Mohs rating of 8-8.5 (a diamond is 10). Custom-shaped tiles of the fused cast basalt were set in a mastic mortar inside the six cyclones, each over 36 ft. tall and 10 ft diameter.

Installation of the ceiling tiles by a seven-man construction crew involved fusing a metal bar into the back of each tile and then welding the bar to the cyclone’s inner surface. This attachment method was used to completely isolate the support system from abrasion. The method also was used because of weight and gravity considerations to produce a more secure hold on the ceiling’s surface as opposed to using adhesives only.

“Since the installation in early 1986,” said Sato, “there has been no downtime at any of the six cyclones, and company officials are considering lining eight other cyclones in the same way this year.” Estimated life for the basalt linings is 20 years, with a manufacturer claimed cost recovery period of about four years. During installation of the basalt linings, workers discovered that the lowest section of the cone bottom had been lined with the same cast basalt material by the original cyclone supplier before being put into service around 1980.

Typically, abrasive effects are the worst here, but there had been no downtime with that portion of the system, so that company officials were assured of the new lining’s future performance. More information on the linings can be obtained from Kalenborn Abresist Corp.