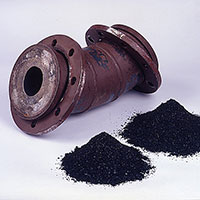 Tetra Technologies, East Chicago, Ind., processes mill scale from steel making and rolling to separate the oil and steel filings. Mill scale is jagged, irregular shaped steel filings that range in size from 8-mesh to 8-microns, and according to a Tetra Waste Management Division representative, “will tear up anything.”

The facility was the only plant of its kind in the world, using a proprietary process consisting of heat, agitation and surfactants to remove oil from steel for recycling. During the process, mill scale was pumped through three separate tanks at the rate of 160 to 200 gallons a minute. Approximately 50 percent of the pumped material was composed of solids.

Within months of its startup in the fall of 1990, the facility, which ran 24-hours a day, was operating at only 80-percent efficiency. The extremely abrasive mill scale was literally destroying elbows every five days to two weeks. “The elbows were blown all the way through,” said a maintenance foreman.

Anywhere the flow changed direction, the vortice elbows and fabricated steel sludge piping that was initially installed wore out almost faster than they could be replaced. The company was also having problems with tank outlet spools. The downtime was costing the company operating efficiency and $600 per hour.

As a test, in November 1990, the company ordered six 2.5-inches inside diameter spools with special flanges from Kalenborn Abresist Corp. of Urbana, Ind. After monitoring the spools and finding that they withstood the abusive environment, the company decided to put the new materials to the ultimate test. They installed a basalt-lined radius, 2.5-inch inside diameter elbow from the same company. After several months, the elbow showed virtually no signs of wear. 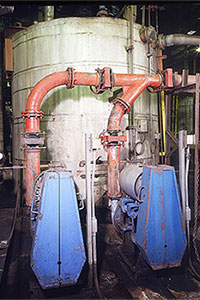 Elbows such as these used to need replacing every 5 to 14 days.

Tetra had found the solution to its problem. Over the next few months the company refitted the plant with over 100 feet of basalt-lined straight pipe, 26 special spools and fittings such as elbows, laterals, and tees. The company also had Kalenborn Abresist design and install a high-density alumina ceramic splash and diverter plate.

“We had tried so many things that didn’t work. Now we have little pipe related downtime and when we do, we can plan it,” said one company spokesman. “Kalenborn Abresist has saved us a tremendous amount of downtime. And operating efficiency has increased from a low 80 percent to a more acceptable 91 percent.”